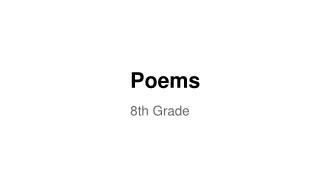 Poems. 8th Grade. Introduction to Poetry by Billy Collins. I ask them to take a poem and hold it up to the light like a color slide or press an ear against its hive. I say drop a mouse into a poem and watch him probe his way out, or walk inside the poem’s room