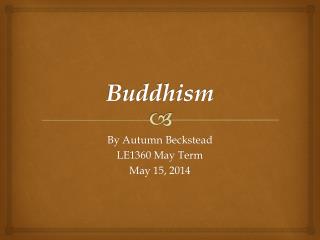 Buddhism. By Autumn Beckstead LE1360 May Term May 15, 2014. History of Buddhism. Most historians agree that Buddhism originated in northern India in the 5th century B.C.E. It was founded by Siddhartha Gautama: The Buddha. Beliefs.