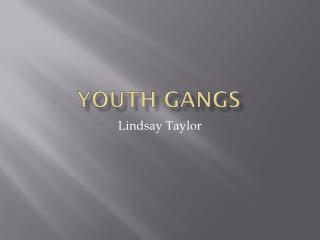 Youth Gangs. Lindsay Taylor. Influence. The authors found that youth gang members tried to validate their gang membership due to the desire for protection. However, it was found that by joining a gang the youth actually put themselves at a greater risk of victimization. Chapter 14 Youth Gangs - . youth gangs. a loose or formal collection of 12- to 24-year-olds who identify themselves as a

Youth, Gangs and Guns for Montreal Interveners - . the problem: youth, gangs and guns. 1. problem: misconceptions. only