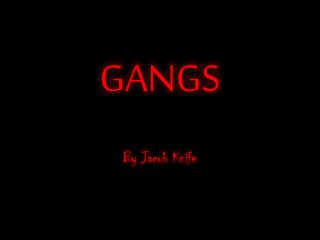 GANGS. By Jacob Knife. Gang. A gang can be a group of criminals or delinquents who band together for mutual protection and profit. A gang can also be a group of people who associate together or act as an organized body. . Type of Gangs. Street Gangs Prison Gangs Outlaw Motorcycle Gangs