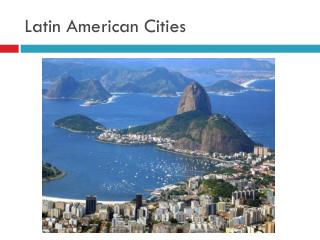 Latin American Cities. Mega city. A metropolitan area with more than 10 million people. In 1994 there were 15 megacities. By 2030, it is expected there will be 21 megacities . There are also new developments called mega regions . These are a large network of metropolitan areas. Great American cities - . explore cultural, historical, political and artistic angles of some of the finest cities in the