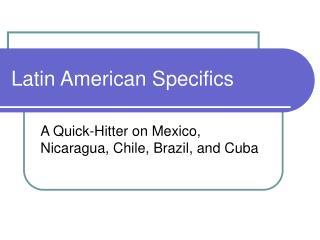 Latin American Specifics. A Quick-Hitter on Mexico, Nicaragua, Chile, Brazil, and Cuba. You say you want a Rev-ah-loooo-chaaa-ahh-ahh-ahh-an…. Cuba: an Army officer named Fulgencio Batista was the corrupt leader of Cuba until the reign of Fidel Castro