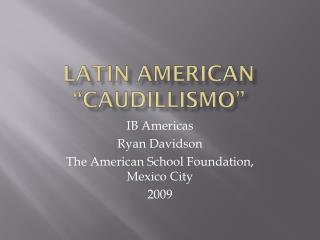 Latin American “ Caudillismo ”. IB Americas Ryan Davidson The American School Foundation, Mexico City 2009. So independence…yeah…about that…. Liberals and revolutionaries sought to strip the church of its immense power and supplant the state/individual with the power of the church Latin American Independence - . in this lesson, students will be able to explain the accomplishments of the following

Latin American Fiction - . el boom. before the middle of the 20 th century, novelists’ works often did not find impact

Latin AMERICAN REVOLUTIONS - . revolution in haiti. you should remember this from napoleon… first latin american