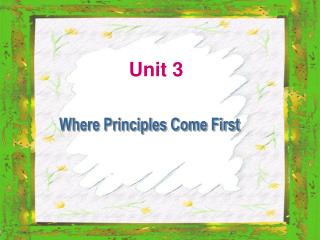 Unit 3. Where Principles Come First. 1. What is the purpose of education?. Education has for its object the formation of character. 教育的目的在于品德的培养。. Education is not an end, but a means to end. 教育不是目的，而是一种达到目的的手段。.