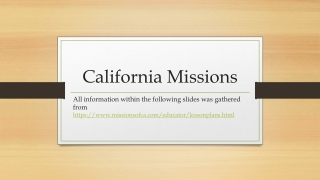 California Missions. All information within the following slides was gathered from https://www.missionsofca.com/educator/lessonplans.html. SWBAT. identify who founded and where their mission is located. describe the physical characteristics of their mission. CALIFORNIA MISSIONS - . by aurora schuck. san carlos borromeo de carmelo. .this mission was found by the father of all

California Missions - . by mrs. nolan. there are 21 missions in california.

California Missions - . by marilyn kowsari october 12, 2007. what was a mission?. a religious settlement. location of the

California Missions - . by ms. cardenas. introduction to the

Spanish California and the Missions - . coming of the europeans. a memorial to estanislao , as an armed warrior, modesto,

A Tour Through the California Missions - . have you ever wondered what it would be like to live during the times of the

Missions - . first missions in texas. friars in 1682 founded the first permanent settlement of europeans in texas—the

Space Missions - . finding a way to coexist in the future. space missions. * early rockets were used to launch astronauts

ARGENTINA MISSIONS - . “every man has more right to hear the gospel once, than any man has to hear it twice.”. avon

Understanding Missions - . the biblical rationale for taking the gospel to the ends of the earth the master’s mission.