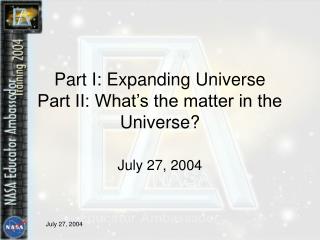 Ontological Cosmology - "ontological cosmology: you want to live in a universe with no faster than light

The Universe and Galaxies - . 16.1. most important image. planet eating star!. universe. the sum of all matter and energy

Astronomical and Physical Sciences - . the universe, the solar system, the earth, and life were recently created.

How Do You Make a Universe? - . geary albright saturday morning physics march 3, 2012. the history of the universe can be