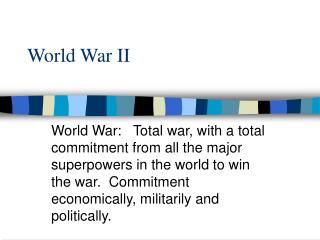 World War II. World War: Total war, with a total commitment from all the major superpowers in the world to win the war. Commitment economically, militarily and politically. Allies. Represent the “Free” world. Major players consisted of Great Britain, France, U.S., and the Soviet Union.