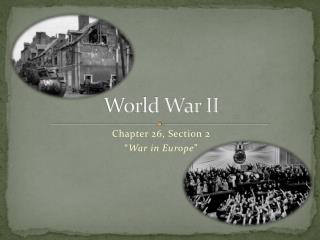 World War II. Chapter 26, Section 2 “ War in Europe ”. Keys to WWII. 2 fronts: Eastern and Western Be able to compare and contrast the three dictators: Stalin, Hitler, Mussolini. 3 parts to the War: 1. War in Europe (the 2 fronts) 2. War in Japan (war in the Pacific) 3. Holocaust.