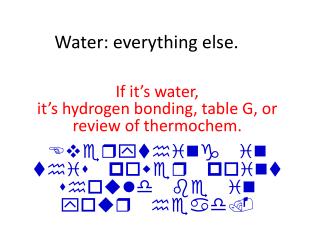 Water: everything else. If it’s water, it’s hydrogen bonding, table G, or review of thermochem . Everything in this power point should be in your head. Water is held together by polar covalent bonds, and the molecule is polar because it’s bent, it does NOT have radial symmetry.