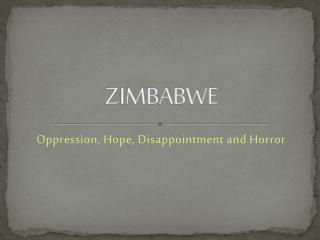 ZIMBABWE. Oppression, Hope, Disappointment and Horror. Location. Colonization. 1890: Great Britain colonizes Zimbabwe, calls it Rhodesia after the brutal conqueror of much of southern Africa . Its excellent farmland attracts many white settlers who seize the best land.