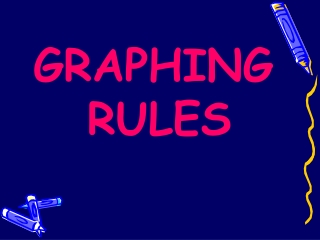 GRAPHING RULES. GRAPHING RULES. The purposes of creating graphs are to: Display data in a different format Make it easier for you to see patterns, trends and relationships. While are there are several types of graphs; we will focus on: bar graphs line graphs. BAR GRAPHS Graphing Dinosaurs - . introducing graphing concepts through the use of excel. presented by ruth kelly. audience 2nd

Smarties Graphing in Excel 2007 - . j. kellow. the task. you will be predicting the most common smarties colour then

Graphing 101 - . graphing basics. use: graph paper a ruler a pencil (be neat) connect data points; use a line of best

Graphing Linear Inequalities in Two Variables - . section 2.8. review. which of the following ordered pairs is a solution

Experimentation and Graphing - . objectives: 1. students will learn about the importance of keeping good records and

The DESMOS Graphing Calculator: - . elegant. intuitive. f lexible. free!!!. there are a lot of good reasons to consider

Solving Equations by Graphing - . solving equations. solving an equation means finding the value of x if y = 0 there are

Using a Graphing Calculator in the Classroom - . when should technology be used?. the graphing calculator is a wonderful