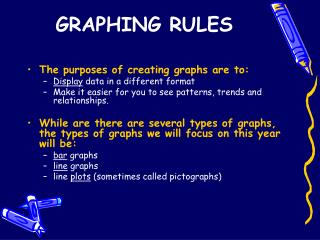 GRAPHING RULES. The purposes of creating graphs are to: Display data in a different format Make it easier for you to see patterns, trends and relationships. While are there are several types of graphs, the types of graphs we will focus on this year will be: bar graphs line graphs Overview Rules of Origin (ROO) - . department of trade negotiations 11 june 2010. rules of origin. their importance is

Rules and Regulations - . uniform school uniform changes will come in to force from june 15 2011 regular uniform to be

The Rules of Basketball - . by joshua singel. students. teachers. objectives. after this lesson, students will be able