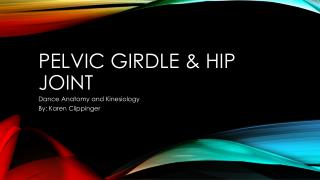 The Hip Joint and Pelvic Girdle

The Hip Joint - . exercises and injuries. pelvis abnormalities. to appreciate the abnormalities that may occur, picture a

The Hip Joint - . e.q. what is the structure of the hip joint?. bones. ilium ischium pubis femur (sacrum). 3 joints of

Pelvic Girdle-Lower Limbs p. 158-161 - . pelvic girdle consists of two coxal bones that articulate with each other