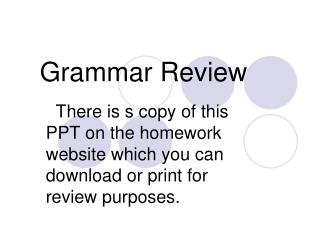 Grammar Review. There is s copy of this PPT on the homework website which you can download or print for review purposes. Tricky Words. Wrong Right Should of Should have Alot a lot ( 2 words) Off of off (don’t use with of). Prepositions. Punctuation, Grammar, and Usage Exam Review - . fatima prefers to walk to market, while i would rather go by helicopter.

Goals for this quarter: - . find your writing voice how? practice! review grammar after the review, you are responsible

Grammar Review - . infinitives: indicate its function in the sentence. adverb adjective noun for some, the attempt to