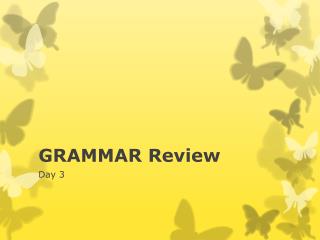 GRAMMAR Review. Day 3. Warm Up. Word Bank : Adjective Adverb Conjunction Noun Pronoun Preposition Verb. The shortest day is in December. The weather is often cold at that time of year. When plants are kept indoors, they can thrive even in cold weather. Grammar Review - . subjects, predicates, and parts of speech. what is the proper noun in the sentence?. mrs. smondrowski

Grammar Review - . there is s copy of this ppt on the homework website which you can download or print for review

Grammar Review - Only in grammar can you be more than perfect.  ~william safire . grammar

Grammar Review! - . my brother hoping to get a job requested an interview. the girl who won third place is my teammate. .

Grammar Review - . comma splice: “the attempt to join two independent clauses with a comma, but without a

Grammar Review - . sentence types. phrases &amp; clauses what’s the difference?. a clause is a group of words that

Grammar Review - T ake out a sheet of notebook paper and title it grammar review 2/18/14. provide the formula(s) for

Grammar Review - . there are many thing about grammar that can make you crazy!!! this is the most important stuff….