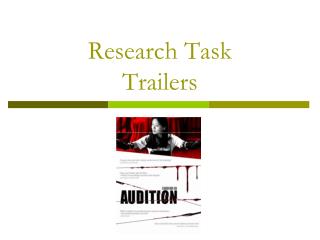 Research Task Trailers. Audition. Audition (1999) is a Japanese horror movie based on a novel, the film was directed by Takashi Miike, it was rated UK 18 by the BBFC. It was rated an 18 due to the BBFC’s guidelines for film classification. Trailers - Fall 2012. rules: you have 30 min to unload/load and then you must park your vehicle in designated parking

Trailers - Food tents. rules: you have 30 min to unload/load and then you must park your vehicle in designated parking

Moving Trailers - Welcome to trucking cube, a brand which is an innovation in itself. within our 28 years of work