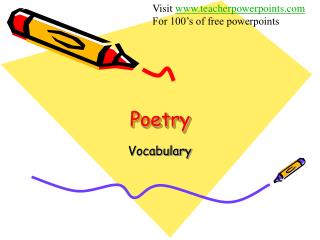 Visit www.teacherpowerpoints.com For 100’s of free powerpoints. Poetry. Vocabulary. Alliteration : Repetition of initial consonant sounds Example : Sister Suzy sat on the seashore until suddenly she was swallowed by a shark . Allusion :