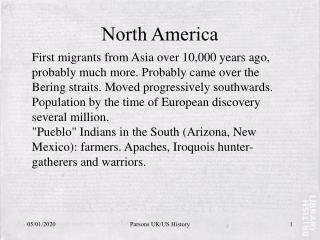 North America. First migrants from Asia over 10,000 years ago, probably much more. Probably came over the Bering straits. Moved progressively southwards. Population by the time of European discovery several million. North America - . describing north america as a realm. consists of canada and usa (hawaii excluded). major cities of the

North America - . africa. introduction to greek philosophy. why the greeks???. what was unique about the greek cultural,

North America - . how can we organize the geography of north america? by culture? by landscape? by region? can we combine

North America - . the early colonial period. the vikings …err…i mean the norse . from the 9 th to the 12 th century,