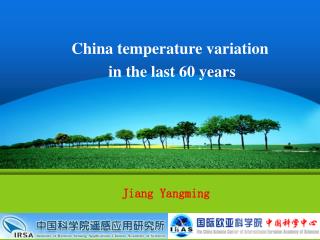 Stalin the last years - . or, how we really miss you. the great patriotic war. 22 june 1941: operation barbarossa, the

The Last Ten Years - . derek law, university of strathclyde. ancient history. 20 years ago we saw the first cd-roms with

Celebrating 60 Years - Israel and the american cyrus. celebrating 60 years. one of the “proudest moments” of my life.

Kiribati, gone in 60 years - Photographer david gray documented life in the pacific island nation of kiribati, a chain of

60 Years of the Western - . a quick look at 6 decades of the western neurosurgical society a 10 minute talk -- plus time

Over The Last Three Years… - . the real estate market has been how should i put it... less robust than it has been in

60 years of Independence - . places in israel. match the words to the pictures. the dead sea. dome of el akza. western

The Last Dynasty of China - . the qing dynasty of china. the manchus. the manchus were from manchuria, the large region