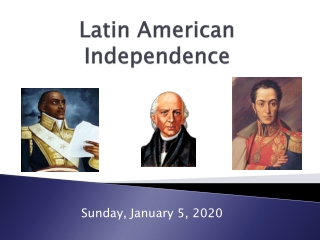 Why did Latin American countries seek independence in the 19 th century? - Revolutions occurred in other parts of the

Which pair of issues aroused the most controversy between 1819 and 1820? A. Internal improvements and Latin American in

Bell Work - . complete chapter 14 section 5 questions. you will turn this in tomorrow. you have 15 minutes!. note taking

Latin American Independence - . background. the ideas of liberty, equality, and democratic rule found their way to

Colonization and Independence of Latin America - . slavery in latin america. finding cheap labor was a goal of the

Music of Latin America - . “ ¡viva méxico! ”. in this unit, we will…. explore the geography of areas with latin