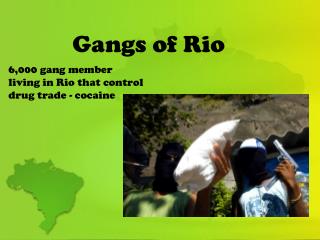 Gangs of Rio. 6,000 gang member living in Rio that control drug trade - cocaine. One of the highest crime rates in Latin America Five Brazilian cities rank among the 15 most violent in Latin America – Sao Paulo, Salvador, Recife, Rio and Brasilia.