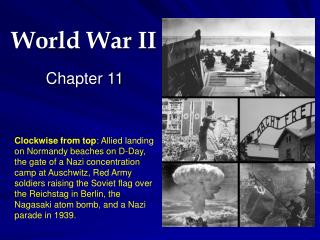 World War II. Clockwise from top : Allied landing on Normandy beaches on D-Day, the gate of a Nazi concentration camp at Auschwitz, Red Army soldiers raising the Soviet flag over the Reichstag in Berlin, the Nagasaki atom bomb, and a Nazi parade in 1939. Chapter 11.