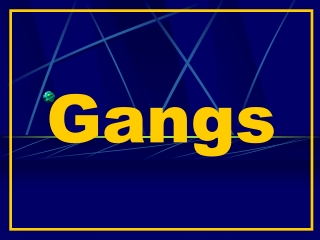 Gangs. What is a Gang?. A group of people who form an allegiance for a common purpose, AND/OR who engage in violent, unlawful, or criminal behavior. Based on the definition, is a gang always bad? When do gangs become bad?. Why do teens join gangs?. Friendship Peer Pressure