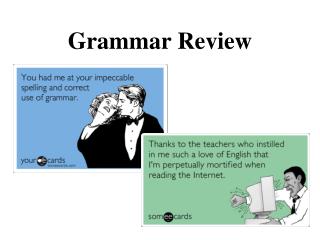 Grammar Review. Use Commas:. -Between items in a series: All my cousins , aunts , and uncles came to our family reunion. **Commas do go before the and ! -If all the items are joined by and , or , or nor do not use commas to separate them! I need tacks and nails and a hammer. Grammar Review - . subjects, predicates, and parts of speech. what is the proper noun in the sentence?. mrs. smondrowski

Grammar Review - . there is s copy of this ppt on the homework website which you can download or print for review

Grammar Review - Only in grammar can you be more than perfect.  ~william safire . grammar

Grammar Review! - . my brother hoping to get a job requested an interview. the girl who won third place is my teammate. .

Grammar Review - . comma splice: “the attempt to join two independent clauses with a comma, but without a

Grammar Review - . sentence types. phrases &amp; clauses what’s the difference?. a clause is a group of words that

Grammar Review - T ake out a sheet of notebook paper and title it grammar review 2/18/14. provide the formula(s) for