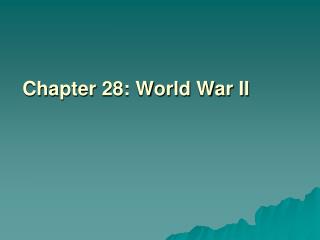 Chapter 28: World War II. Axis Aggression. When Adolf Hitler came to power in 1933, he promised to return Germany to glory. He wanted the German people to have lebensraum or living space. Hitler also started to rebuild Germany’s military, because he knew that no one would stop him. Chapter 12 – World War II - . #6 impact of wwii. essential question : what was the impact of world war ii on the united

Chapter 24: World War II - . review. president during world war i. he played an important role in ending the war and

World War II - . america and the world. introduction. research paper #2 webquest discussion—all 3 due on friday what it