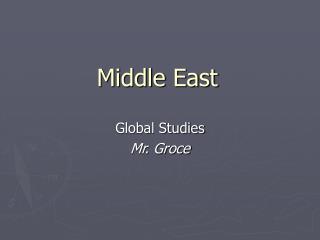 Middle East. Global Studies Mr. Groce. The Land. Originally, the Middle East was covered with dense tropical forests and swamps. This vegetation rotted, which resulted in rich oil fields. The river valleys formed the “cradles of civilizations” due to their fertile land. The Fertile Crescent