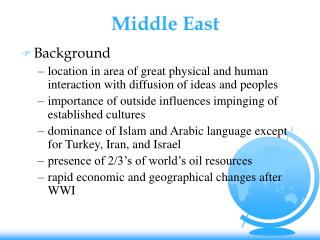 Middle East. Background location in area of great physical and human interaction with diffusion of ideas and peoples importance of outside influences impinging of established cultures dominance of Islam and Arabic language except for Turkey, Iran, and Israel