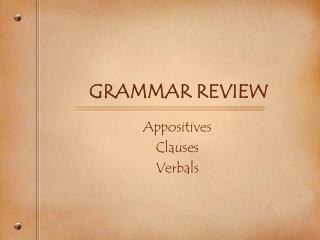 The Cardiff Grammar: What is it? and Why is it? Robin P. Fawcett - Centre for language and communication research

Monday Grammar: Commas - . the rules. objective. students will be able to... - recognize dependent and independent

Grammar Jeopardy Pronoun Edition - . grammar jeopardy. there/ their/ they’re. whose / who’s. he/ him she/ her. i /