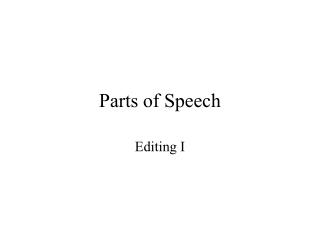 Parts of Speech. Editing I. Grammar. Grammar refers to the relation of words. The rules of grammar reflect patterns of speech and writing of the educated elite. What makes grammar fun is knowing the rules and when to break them.

Chapter 2 Speech Sounds - . introduction. speech and writing are two media for language. speech is prior to writing, so

Parts of the Microscope and Their Function - . rules of using a microscope. always carry with 2 hands only use lens paper