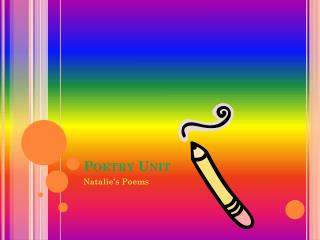 Poetry Unit - Step 1: choose a poet. find a poet that you are interested infind a style of poetry that appeals to you.

Poetry Unit - . analysis catalysts form poetry. opening qs. what is poetry? what are vital attributes to the poetry

Poetry unit - . a short piece of imaginative writing, of a personal nature and laid out in lines. “when the frost is

Poetry Unit - . “touchscreen”. journal: what are your thoughts on this poem? . discussion. what is marshall’s

POETRY UNIT - . the types of poetry…. narrative- tells a story lyrical- short poem that could be set to music cinquains

POETRY UNIT - . key terminology. q: what is the definition of form?. a: the way a poem looks on a page. . example of the