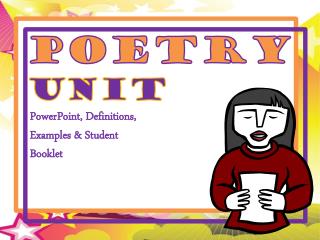 Poetry Unit. PowerPoint, Definitions, Examples & Student Booklet. Poetry Defined . Poetry is a form of literary art in which language is an imaginative awareness of experience expressed through meaning , sound, and rhythmic language choices so as to evoke an emotional response.