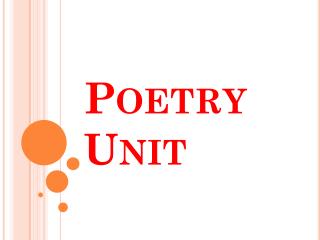 Poetry Unit. What is poetry????. One of the three major types of literature (with prose and drama) Most poems make use of concise, musical, and emotionally charged language Alive with imagery, figurative language, and sound devises. Poetry Terms. Verse – a line of poetry; often numbered