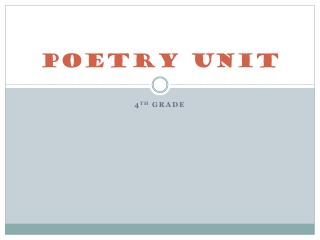 Poetry Unit. 4 th Grade. What is Poetry?. A type of literature that can express feelings, ideas , or express a short story. Monday . What is Poetry? Create Poetry Journals Read Poems Poetry Terms Rhyming Poem I Like Lots of Things Poem. My Dog He Is an Ugly Dog By: Jack Prelutsky.