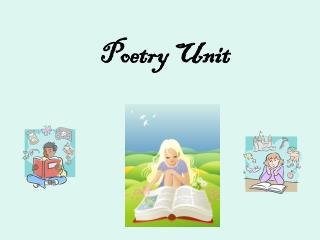 YEAR 5 POETRY UNIT - . week one. during today’s lesson . we will: review our previous learning – by showing we

Poetry Basics - . poetic structure. a syllable is a single unit of sound. a foot is the basic unit of poetry made up of a

War Poetry - . lo: to commence our unit of war poetry. discuss:. an unjust peace is better than a just war. all wars are

Poetry Unit English 102 - . learning targets: i can identify and understand the various elements of poetry i can explain

POETRY UNIT DAY ONE - . what is poetry? famous poets have defined poetry in different ways. w.h. auden called it

Poetry Unit - . “touchscreen”. journal: what are your thoughts on this poem? . discussion. what is marshall’s

War Poetry - . lo: to commence our unit of war poetry. discuss:. an unjust peace is better than a just war. all wars are

Mrs. Lutze’s Poetry Unit - . combining poetry and song. what is poetry?. group activity-read your section of the

AP Language and Composition - . poetry unit. unit objectives. this unit is going to be about poetry and we are going to

Elements of Poetry - . “poetry is when an emotion has found its thought and the thought has found words.” - robert

introducing POETRY - Welcome to my favorite unit!. introducing poetry. what do you need to know about poetry?. 1. 3. 2.