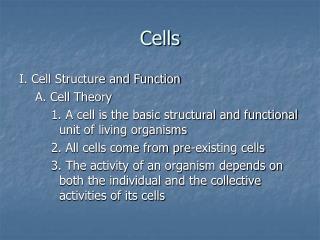 Cells. I. Cell Structure and Function A. Cell Theory 1. A cell is the basic structural and functional unit of living organisms 2. All cells come from pre-existing cells 3. The activity of an organism depends on both the individual and the collective activities of its cells. Cells.