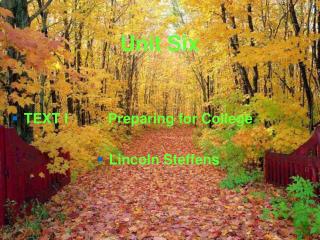 Unit Six. TEXT I Preparing for College Lincoln Steffens. About the author. Main Idea and outline. Please turn to page 78, and read the passage “Organization and development”. Then work out the main idea and the outline of the text. Outline of the Text. Part I: (Paragraphs 1 - 4) Unit Six - . exploring the big question. “a goal is a dream that has an ending.” ~ duke ellington. what are

Unit Six - . marriage. objectives:. 1. grasp the main idea and structure of the text; 2. appreciate the use of interior

Unit Six - . risks. preparation. 1. risks in jobs 2: which activity is riskier? 3: why would people like to take risks?.

Unit Six - . animal intelligence. text a. what animals really think food, warmth, sleep? their thoughts may be much