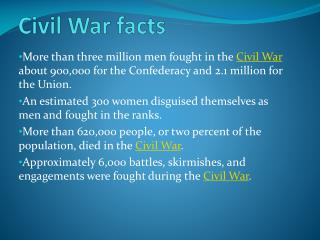 Civil War facts. More than three million men fought in the Civil War about 900,000 for the Confederacy and 2.1 million for the Union. An estimated 300 women disguised themselves as men and fought in the ranks. Georgia , the Civil War, and other Civil War Facts - . georgia studies. georgians in the war. by october of 1861, more

FACTS ABOUT THE CIVIL WAR - . equality of all men in question both sides fighting to preserve their traditions brother vs

FACTS ABOUT THE CIVIL WAR - . equality of all men in question both sides fighting to preserve their traditions brother vs