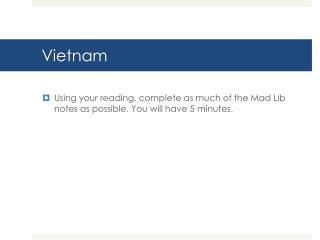 Vietnam. Using your reading, complete as much of the Mad Lib notes as possible. You will have 5 minutes. CONCLUSION ON VIETNAM. Vietnam was a complicated issue Read Nixon’s Speech on Vietnamization : What is the basis of Nixon’s policy in Vietnam?