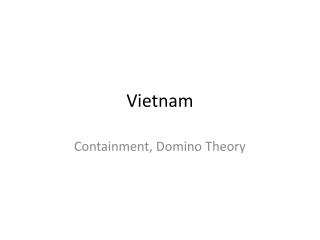 Vietnam. Containment, Domino Theory. Vietnam. Domino Theory. The Domino Theory was that if North Vietnam won the war then Laos Cambodia and the rest of Asia will turn communist. America and south Vietnam did not wan to be communist and let it spread throughout Asia. What is a just war?.