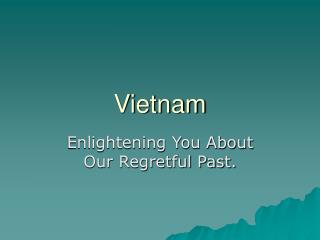 Vietnam. Enlightening You About Our Regretful Past. Visual Aids. Cont. The Story. Conflict broke out between U.S. aided South Vietnam and the communist guerilla forces of North Vietnam. The war broke out soon after the Geneva conference divided Vietnam at the 17 n Lat. Mark.