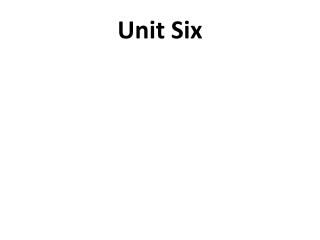 Unit Six. Unit 6. 1. Anonymous : unnamed, without the name of the person involved (writer/composer, etc.); unknown, nameless; lacking individuality or character. Adjective. The detective received an anonymous tip that helped to narrow the search for the thief. Unit 6. Unit Six - . text i preparing for college lincoln steffens. about the author. main idea and outline. please turn to page

Unit Six - . exploring the big question. “a goal is a dream that has an ending.” ~ duke ellington. what are

Unit Six - . marriage. objectives:. 1. grasp the main idea and structure of the text; 2. appreciate the use of interior

Unit Six - . risks. preparation. 1. risks in jobs 2: which activity is riskier? 3: why would people like to take risks?.

Unit Six - . animal intelligence. text a. what animals really think food, warmth, sleep? their thoughts may be much