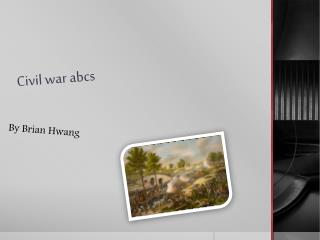 Civil war abc s. By Brian Hwang. A, B, and C. A-Antietam. The Battle of Antietam was the bloodiest battle. Also the first battle of the Civil War. My Civil war abc book - . a is for abraham lincoln. lincoln, the president of the us during the civil war.  his main aim