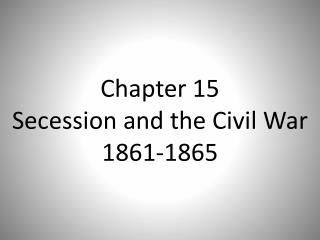 Chapter 15 Secession and the Civil War 1861-1865. The Tide Turns. early 1863 the Confederate economy was in shambles and its diplomacy had collapsed as slaves fled from plantations, more and more lower-class whites deserted the army or refused to be drafted at all AP U.S History Unit 5 - The civil war and reconstruction. ap u.s history unit 5. what to focus on as you read:. events