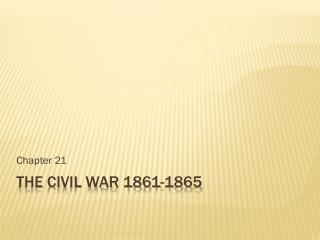 Chapter 21. The Civil War 1861-1865. The Union (Blue) Northern states and the US Federal government West Virginia broke off from Virginia to stay in the Union The Confederacy (Grey) Southern states fighting for independence and keeping slavery. Two Sides. Confederate. Union. Manpower: THE CIVIL WAR, 1861-1865 - . basic facts. united states of america=union, aka the north; president is lincoln confederate

The Civil War (1861–1865) - . fort sumter. with lincoln in office and all hope of compromise extinguished, the

The Civil War, 1861-1865 - . mobilization, strategies, and diplomacy. comparing the sides. mobilization in the north and

The Civil War 1861 -1865 - . focus questions. what were the goals of both the north and south? what advantages did each