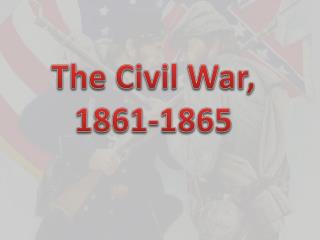 The Civil War, 1861-1865. Mobilization, Strategies, and Diplomacy. Comparing the Sides. Mobilization in the North and South. The Anaconda Plan. Gen. Winfield Scott. Divide Confederacy and squeeze to death. Struggle for the Border States and Wartime Diplomacy. The American Civil War 1861-1865 - . ss8h6: the student will analyze the impact of the civil war and reconstruction on

Chapter 15 Secession and the Civil War 1861-1865 - . how could the us function as a country if its members could come and

The American Civil War 1861-1865 Part I The Prelude to War - . is presented to you by kathleen m. price in association

The Civil War (1861-1865) - . the civil war starts: with increased tension between the north and the south (slavery and