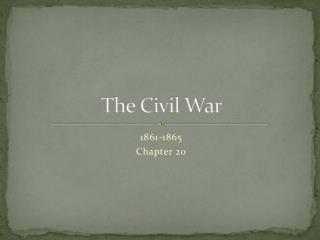 The Civil War. 1861-1865 Chapter 20. Lincoln’s 1 st Inaugural Address. No interest in interfering with slavery where it already existed Sought to see laws of Union executed in all states Civil Liberties - . “your rights as americans”. in this chapter we will cover…. 1. the foundations of civil